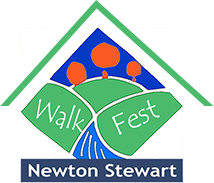 Walks for all levels

Choose from easy to very strenuous.

The Galloway Hills offer a wealth of opportunity to enjoy the peace and tranquillity of rolling hills, countless lochs, picturesque burns and waterfalls, and an abundance of plants, bird and animal life.

The walker has a choice of over 40 summits of 2,000 feet or more, many presenting quite a challenge, whilst lesser hills and forest trails offer a more leisurely pursuit with ample opportunity to appreciate the beauty of magnificent scenery and varied wildlife.

The Galloway Hills form part of the Southern Uplands but are generally contained in a fairly compact arrangement of six distinct groups:

The 'Awful Hand', a fanciful name given to a range of hills in which the Merrick (at 2,766 feet the highest hill in Galloway) is the forefinger. The other fingers are Shalloch on Minnoch, Tarfessock and Kirriereoch, with Benyellary the thumb. Buchan Hill, at the southern end of the range, overlooks Loch Trool.

The Dungeon Range, which runs parallel to the Awful Hand, extends from Craiglee, near Loch Dee, to Macaterick. The highest in the range is Mullwarchar at 2,270 feet.

The Kells, an undulating ridge of hills parallel to, and east of, the Dungeon Range, stretches from Darrou at the southern end to Black Craig which rises above Loch Doon. Corserine, at 2,669 feet, is the dominating hill in the ridge which includes 13 summits of at least 2,000 feet.

The Minnigaff Hills with Lamachan, its highest at 2,350 feet and Curleywee, the most rugged, lies south of Loch Dee between the Water of Trool and Clatteringshaws Loch.

The Carsphairn Range, situated to the north-east of the main group of Galloway Hills, includes Cairnsmore of Carsphairn (2,614 feet) and 13 other hill-tops of over 2,000 feet.

The Solway Hills are fairly scattered along the Solway Coast-line from Cairnsmore of Fleet (2,331 feet) near Newton Stewart, to Criffel just south of Dumfries.

Despite the general compactness of the Galloway Hills, the absence of trails and scarcity of public transport makes the walker very much dependent on his/her own vehicle for access to the hills. Also, with the proliferation of forestry, a knowledge of suitable access points, forest roads and paths is essential; these are not generally publicised or easily obtained.

The walker should note, with the possible exception of the popular tourist path to Merrick and the picturesque Gairland Burn path, clear paths are very few and far between. Deer, goat and sheep trails can often be used to advantage but all too frequently the way lies across grassy, heather-strewn, bracken covered, or rocky surfaces and the multiplicity of burns, albeit extremely attractive, can present a problem after heavy rain.

An obvious need is for substantial footwear, suitable clothing, first-aid kit, a whistle and emergency rations. A compass is also a must, plus relevant maps and the ability to use both in all weathers. The maps should preferably be of the scale 1:25,000 which give details of forestry roads and fire-breaks. The use of gaiters is strongly recommended, not just as a safeguard against adders (not really a great problem) but as a protection against heather and excessive damp, and a walking pole can be handy for checking the depth of marshy ground or snow. Essential too, for emergencies or enforced long stays in the hills is a 'bivvy bay' (survival bag) and walking crampons for crossing ice fields in winter.

Mountain bothies do exist and offer shelter, but these are few and far between, and are all on lower ground.

We do not apologise for stressing the need for care, for whilst the Galloway Hills lack the sheer ruggedness of the Scottish Highlands they are fairly remote. Weather conditions can change rapidly. We strongly recommend posting a Route Card using our online system and leaving a copy with a friend or, if staying in local accommodation, your hotelier.

The walker is also reminded of the need to take special care to prevent the outbreak of forest fires, to avoid damage to property, to close gates (particularly during lambing season in the spring), to take litter away, and to generally preserve the unspoilt nature of our beloved Galloway Hills.

Duly advised however, the visitor is able to enjoy complete freedom, to roam at will and sample the delights of one of the most beautiful parts of Scotland. The climate too, being influenced by the warm Gulf Stream, is generally mild and compares favourably with many districts south of the border.

So, whether for the pleasure of viewing the wonderful scenery, observing the flora and fauna, or just for the exercise, the walkers of Galloway's hills will not be disappointed.